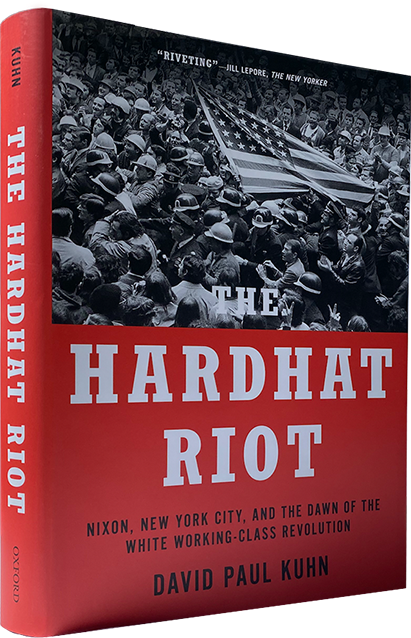 In May 1970, four days after Kent State, construction workers chased students through downtown Manhattan, beating scores of protesters bloody. As hardhats clashed with hippies, it soon became clear that something larger was underway—Democrats were at war with themselves. In The Hardhat Riot, David Paul Kuhn tells the fateful story of when the white working class first turned against liberalism, when Richard Nixon seized the breach, and America was forever changed. It was unthinkable one generation before: FDR's "forgotten man" siding with the party of Big Business and, ultimately, paving the way for presidencies from Ronald Reagan to Donald Trump.

This is the story of the schism that tore liberalism apart. In the shadow of the half-built Twin Towers, on the same day the Knicks rallied against the odds and won their first championship, we experience the tumult of Nixon's America and John Lindsay's New York City, as festering division explodes into violence and Nixon's advisors realize that the Democratic coalition has collapsed, that this is their chance, because "these, quite candidly, are our people now."

In this riveting story—rooted in meticulous research, including thousands of pages of never-before-seen records—we go back to a harrowing day that explains the politics of today. We experience an emerging class conflict between two newly polarized Americas, and how it all boiled over on one brutal day, when the Democratic Party's future was bludgeoned by its past. 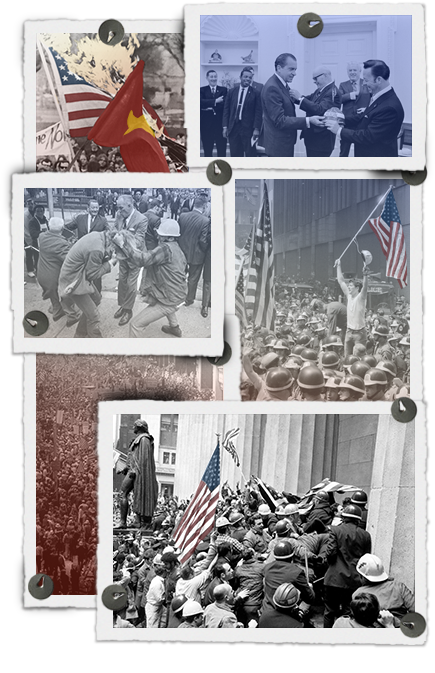 "Perhaps the best book ever on how Democrats lost the white working class. The Hardhat Riot is a great read, but also a must-read to understand the voters that Democrats neglected at their own peril."

"David Paul Kuhn's Hardhat Riot captures a seminal but long-neglected turning point in the steady erosion of Democratic support among the core of the New Deal Coalition. The May 8, 1970, confrontation—AKA, 'Bloody Friday'—between anti-war protestors, mostly students, and tough, unionized construction workers determined to demonstrate their support of American troops in Vietnam, marked the start of the split between a well-educated elite and an increasingly discontented working class, a split that over time produced the election of Donald Trump. This book is crucial for anyone seeking to understand the politics of 2020 and beyond."

"[An] outstanding new book ... through dogged research...combining eyewitness reports with his own gifted storytelling to craft a riveting narrative. In our current intellectual climate, which seems to prize tendentiousness, it is rare to find such a clear-eyed and non-polemical work of history."

"I picked up David Paul Kuhn's The Hardhat Riot with the intention of skimming and found myself engrossed, reading every page. Well-written, painstakingly researched, this is an important book that gives life to history and explains the divorce between working-class whites and the Democratic Party, and yet rarer still, is also a real pleasure to read."

"The Hardhat Riot, by David Paul Kuhn, vividly evokes . . . a blue-collar rampage whose effects still ripple, not the least of them being Donald Trump's improbable ascension to the presidency . . . this is a compelling narrative."

"This is red-meat history with a hot splash of tabasco. David Paul Kuhn brings to life a period that is not only fascinating in itself but also illuminates the age of Donald Trump. If you want to understand how blue-collar Americans came to feel so disparaged and deplored, The Hardhat Riot is a great place to start. A truly captivating read."

"[An] important new book . . . as an author, Kuhn was in many ways prescient about the rise of Trump's coalition nearly a decade before it happened. . . Kuhn's latest work explains in elegant and expert fashion how [Trump] won so much support among blue-collar white voters in the first place."

"An arresting and often chilling narrative of the events that drove a wedge between white working-class voters and the Democratic Party . . . I couldn't stop reading it. If you want to understand why cultural issues became central to our politics, read this book."

"Revealing . . . compelling . . . arguing convincingly for the Hardhat Riot not so much as the day that turned the tide, but as an unmistakable harbinger of political shifts in the offing, a moment when unlikely symbols of Nixon's Silent Majority roared back, giving voice to grievances that persist to this day."

"Fascinating . . . the most persuasive explanation for the rise of Donald Trump that has yet appeared."

"In his engrossing, well-crafted, The Hardhat Riot . . . [that's] deeply researched . . . Kuhn argues persuasively that the riot sparked a vast national political shift driven by a widening divide between the working class and the educated elite that has led to the era of the Trump presidency. . . . Corrects some misperceptions . . . Kuhn writes with empathy for both sides. . . . Kuhn's accounts of the violence are vivid and raw. . . . The author concludes with a sharp analysis of how the revolt of the White working class almost immediately reshaped American politics, beginning with Nixon's opportunistic claim of blue-collar Whites as "Silent Majority" supporters of his law-and-order presidency. Kuhn shows the reverberations over the decades, right up to the making of Donald Trump's political base. . . . Kuhn argues that class divisions have driven people so far apart that it's as if Americans now live in 'entirely different places, even if they are still called by one name—America.'"

"Over the past 15 years few writers have covered this realignment with the consistency of David Paul Kuhn, whose warnings about the reasons white working people were moving away from the Democrats were largely dismissed by the news media and party elites. . . Mr. Kuhn remained an unacknowledged prophet. . . . Now he has synthesized his message with a lesson from history: The Hardhat Riot, a riveting account of . . . [a] clash on the streets of New York [that] came to symbolize the irreconcilable division taking shape in the rest of the country. . . . By capturing the moment Mr. Kuhn reminds us of how divisive this era really was . . . Kuhn avoids polemics and judgment, yet leads the reader to understand the deeper questions implicit in so many of today's political debates. . . The Hardhat Riot insightfully explains why and how this happened. Perhaps the Democratic Party's leaders will finally understand what David Paul Kuhn has been trying to tell them."

"Perhaps the best book ever on how Democrats lost the white working class." —James Carville

"A gripping history of a moment when two visions of America clashed—with fists flying—throughout the Wall Street district. The Hardhat Riot excavates conflicts over protest politics, American military power, and the party loyalties of the white working class that remain with us half a century later."

"Sometimes events that are long forgotten have reverberations that dominate our times. In Hardhat Riot, David Paul Kuhn skillfully shows how the split between traditionally Democratic constituencies—blue collar workers and militant students—eerily foreshadows the bitter political splits of our time."